Bharuch also known as Broach, is located in Gujarat at the mouth of the river Narmada. This city is located amidst Surat and Vadodra and spreads over an area of 6527 sq km. Bharuch is an industrial hub of Gujrat which is famous for its magnificent temples and its strong connection to Hindu Mythology, which is dated back to Saint Bhrigurishi and Bhagwan Parshram who was also said to be the incarnation of Lord Vishnu.

This city is also renowned for its roasted salty peanuts. Bharuch is acknowledged for the Meghraja Festival which is unique to the region and is celebrated in the month of Shravan . Bharuch is an doing extremely good as a tourist spot of Gujrat as it is an ancient city, and has a rich historical ancestry. It is a wonderful experience to explore the historical delights of Bharuch. Some of tourist spots in Bharuch are-

Bharuch is brimming with temples spread across the city.Some of these religious spots are as follows:

Bharuch is famous for two things, Narmada river and Bhrigu rishi temple present in this town. Bhrigu Rishi Temple, one of the eminent and divine temples of Gujarat, is located in Dandia Bazar area.

Jama Masjid is a place to delve into in Bharuch to know the prosperity of Muslim epitome. Jama Masjid is located on the way to Bharuch fort at its base.

This mandir in Bharuch is built in a spectacular manner in pink sandstone and was consummated with the inspiration and blessings of Swamishri. The five-shikhar temple is 75 ft in height, 151 ft in width and 193 ft in length. It is is flocked by tourists and devotees especially during holidays. 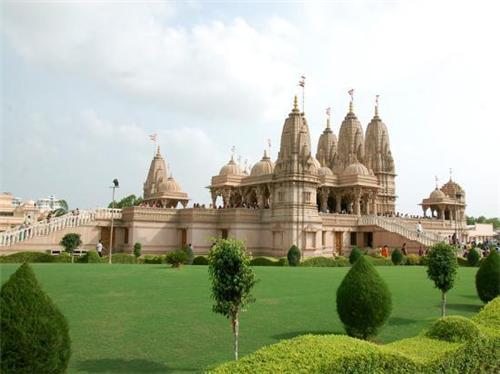 There are nine Swayambhu which means self menifested Shivalingas proliferated across Bharuch. These Shivalingas are popular as Nav Naths of Bharuch. They are named as Gangnath, Jwalnath, Somnath, Bhimnath, Pingalnath, Bhootnath, Kamnath, Siddhnath and Kashi Vishwanath. Bhrigu Rishi preferred Bharuch for his ashram due to the presence of these shivlingas. . These shivlingas are said to be existing primeval.

The Narmada, one of the most sacred river of India and is said to have originated from the sky on demand of lord Shiva. This river is so pure and sacred that just by having a dip in its water or by its sight alone ,the sins of a man are washed away. The river Ganga is being exploited and polluted by thousands o of devotees bathing in it. It is also believed that the Narmada River is older than the river Ganges. The River Narmada flows in the width of one mile in the city of Bharuch. Boating facilities are available in this sacred river as well. Many temples and ashrams are located along the river especially for all the pilgrims walking the entire length of narmada.

Gurdwara chadar saheb is a memorial shrine which was made in memory of Baba Nanak's visit during his missionary Journey. Bharuch is the place from where Guru Nanak Dev progressed with his journey to North India. According to Sikh Mythology, when Guru Sahib reached the bank of Narmada river, the local king refused to provide a boat to guru Sahib who then ordered Bhai Mardana to lay Chadar on the water. Bhai Mardana thus complied with the orders of the Guru and the king remained stunned as they crossed the river on Chadar . Thus, the Gurdwara Sahib has been named as Chadar Sahib. 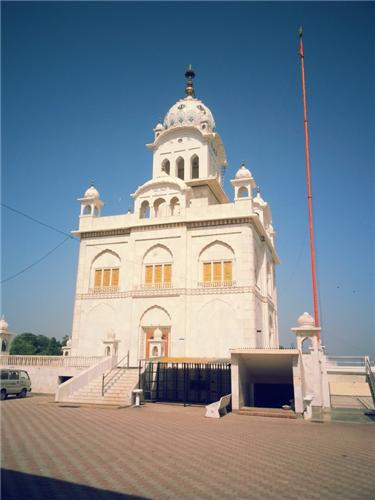 The gurudwara was then built in Kasak area which is the place of his landing in Bharuch. This gurudwara has langars which gives free food. Sikhs have been demanding for a road along the bank straight to the Gurdwara Sahib as due to infringement the path has narrowed down and its challenging to reach the building in vehicles.

This ancient temple is around 150 years old and is located in Dandia bazaar in Bharuch. This temple is worth visiting for its age old architecture and the significance it has in the Hindu Mythology.

This temple is located in Sajod area of Bharuch. The highlight of this temple is the statue of Lord Laxminarayana. The idol is made up of solid silver. One must visit this temple to pay homage to lord Vishnu.

It is one of the most ancient Lord Shiva temples in Bharuch. The idol of this mandir is exclusive as the shivling here is elliptical in shape and is black in color.

Madresa Mosque was built by one of the renowned Muslim ruler Mohammad in 1038 AD and that makes it one of the oldest mosques of Gujarat. The mosque has Persian scriptures encrypted on the wooden plates which provides a wealth of information of the history of the mosque. The pillars of the mosque and the entrance door are exquisitely constructed using black wood. The mosque holds many enticing engravings which are around 200 to 300 years old.Adjacent to the mosque is a shrine of the famous saint and a great scholar, Maulana Ishaqu, who breathe his last air here during 1660 AD.

Roman Catholic Church in Bharuch is one of the most famous and holy shrines existing in Bharuch city of Gujarat. Its was established around 200 years ago however the refurbishing process of the church took place in the year 1861 AD. Bharuch Roman Catholic Church is highly popular amongst the localites as well as the tourists. The credit can be given to its architectural excellence which is magnificent. A colourful masjid is in the frontal side of the church whereas few yards away is a large Hindu temple. The three together make a authentic expression of the progressive and splendid India.

In Bharuch, Neelkantheshwar Mahadev's temple located on the banks of Narmada captivates people living in Bharuch as well as the tourists. Adjoining this temple there is another temple where a huge idol of lord Hanumanji is established. This is done to help the devotees reach the banks of narmada and have darshan of narmada maiya. Special religious sessions are organized here during shravana.

It is one of the ancient temples of Bharuch located on banks of narmada. This temple provides facilities of staying and eating for its devotees.

Bharuch has an extensive history with this city being eyed upon by almost all the dynasties, be it the Guptas, Mughals or Solankis. This was due to the strategic location of Bharuch. This extensive history of the city leaves behind some great historial monuments to gaze upon. Here's a list of them 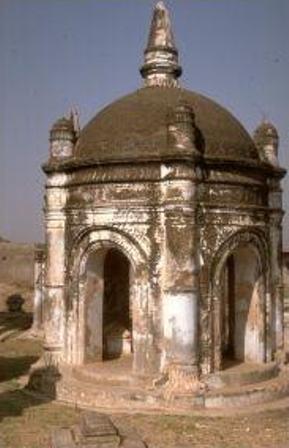 Bharuch Fort was built by Siddhraj Jaysinh in the era of 1791 AD. The fort is in unique colour with some magnificent wooden carvings that makes you astonished. As you climb the fort, one can have a view of the Narmada river. Within the fort there are the Collector's office, the Victoria Clock tower ,the Old Dutch factory, Civil Courts, a church and other buildings. Bharuch fort is the fort which solankis were proud about and it still enthrals the tourists with its towering pinnacle.

This fort also has a tiny room on the second floor that has preparations for setting matchlock guns and the fort also has passages which runs underground. The history of this fort has been inscripted on a stone placed near Custom House Masjid. The inscriptions are written in Arabic and Nagri. This fort saves Bharuch every year from floods as Narmada gets over flooded each monsoon. The wall of the fort restricts river water from entering residential areas of the city. 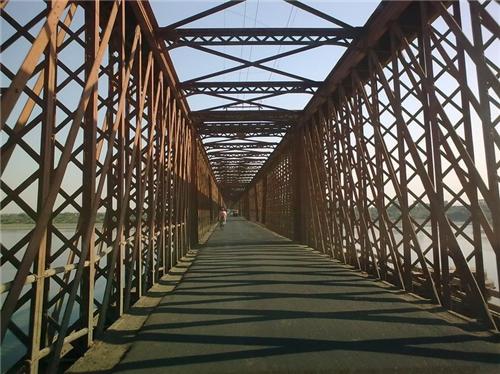 The Golden Bridge is the bridge that brings Ankleshwar and Bharuch closer. It was constructed by Britishers in 1881, as it was essential to create a better approach across Narmada river for administration and trade officials in Mumbai. This bridge is named "Golden bridge " because the iron used in its construction is rugged, resistant to rust and rare, which indicates that it'l be much more costlier than modern steel.

This ghat is located on the bank of river Narmada adjacent to Dandia Bazar. Ten ashwamedha sacrifices had been performed by King Mahabali on this ghat. Lord Vishnu veiled himself as Vamana to appear on this ghat and he then measured the whole universe with three steps. This ghat is brimming with many old temples which includes Ambaji Mata Temple, Narmada Mata Temple, Vamana Temple and many others.

The serenity and tranquilty of this place is at its peak in the early morning hours and tourists must visit this place preferably during morning. The famous Yajna of Dashaswamegha is carried out here. The pilgrims take a holy bath here at this ghat and the evening artis here at this ghat are worth attending. This is an ancient religious site with devotional aspect. This place is hoarded by many people who visit this place especially during the full moon days.

Bharuch is not very popular for its wildlife or sanctuaries but it has one sanctuary located nearby which is as follows:

This sanctuary located at a distance of 80 kms from Bharuch railway station is a must visit for tourists who are wild life lovers. 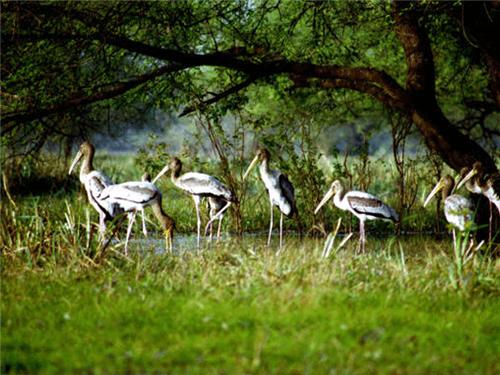 Bharuch , filled with religious temples is a place which makes you happy spiritually, mentally and physically. Bharuch is one place that will not disappoint you if you are holidaying. Filled with simple pleasures, Bharuch is surely going to make its imprint on your hearts and mind.