Bharuch has around 57% muslims. Thus a good number of mosques can be found in Bharuch, out of which Jama Masjid is prominent and famous due to its rich ancestral historical background. This mosque is located at the base of Bharuch Fort. Thus this is a place of double delight for tourists. 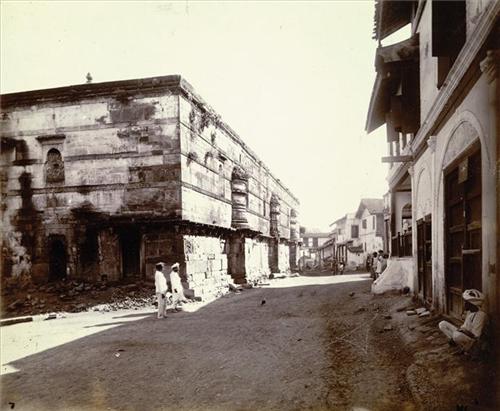 This masjid has a covered courtyard, which is very exceptional in Indian mosques. Due to this a lot of people assume it to be a fort. This mosque has temple materials largely but the planning and construction was undertaken considering  mosque principles. The mosque has a sanctuary on its west and it comprises of a courtyard along with gateways on the rest sides.

The sanctuary on its west had 48 pillars and all of them had bracket pattern. The sanctuary roof comprises of beams that were supporting  three large domes and ten smaller domes. The actual construction is done by local artisans who had assumedly never seen a mosque before. However there must have been certain amount of guidance from Muslim heads.

History of Jama Masjid in Bharuch

This Masjid was constructed during 14th century from  Jain temple and was reconstructed to a mosque. The Jama Masjid was primarily  the palace of Ranakdevi but was transformed to a mosque by Sultan Muhammad Begda. This was done by him when he won the princes of Saurashtra.

Things to do around Jama Masjid in Bharuch

Bharuch fort s located at the hilltop of the base where this Masjid is. This fort holds good historical value and is worth visiting once. Also Narmada river is located near to this mosque.

Hotels to stay around Jama  Masjid in Bharuch

Here is the address of Jama Masjid in Bharuch:

Explore more about Tourism in Bharuch